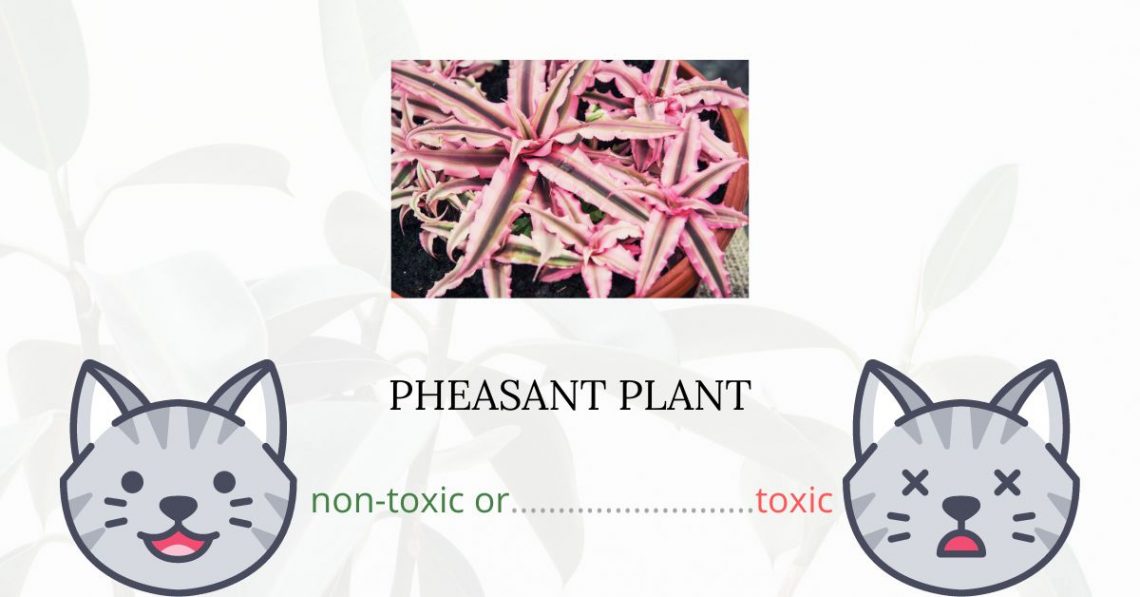 No, the pheasant plant is not toxic for cats. It is even included in the ASPCA (American Society for the Prevention of Cruelty to Animals) list of non-toxic plants.

Eating a small portion of pheasant plants will not harm your kitties. But, ingesting a massive amount of this plant can cause cats to experience indigestion.

Because cats are carnivorous species, they cannot fully digest any kinds of plants. Thus, plants are not really suitable to be added to a cat’s usual diet — whether toxic or not.

Another thing to keep in mind is that certain chemicals used to care for plants include harmful elements that might harm felines. Avoid using such products on your plants or, for a safer choice, go with natural ones.

What is a Pheasant Plant or Zebra Plant?

The Pheasant plant is also commonly known as Crypanthus, Earth’s Stars, Star Fish Plant, and Zebra plant. Scientifically called Cryptanthus Zonatus, it is a houseplant that is a subtropical perennial herb in the pineapple family.

The Pheasant plant or zebra plant requires indirect light because direct sunshine will bleach the spectacular foliage. It grows in a rosette of mid-green leaves with white cross stripes. It will occasionally produce a series of white star-like flowers from the center of the plant.

The zigzag white stripes on the foliage of the pheasant plant give an aesthetic appeal to shaded tropical gardens. It grows up to 20cm tall and likes moderate or dim light. It’s popular in terrariums and novelty planters. They grow in the soil, unlike many other bromeliads.

Cryptanthus has a highly developed root system compared to other bromeliads, which only have tiny, anchor-like root systems. Its roots should spread out to be at least as wide as its leaves. while having bigger root systems. The plant should still have enough room to grow in a five or six-inch planter.

Keeping Cats Away From Pheasant Plant or Zebra Plant

Cats can be easily startled, so anything that makes noise might keep them away from your plants. A strong sound like a stomping foot or clapping hands may stop a cat from doing almost anything.

You may also try stuffing a plastic water bottle with coins as an alternative. When the cat is misbehaving, shake the bottle.

A little mist of water will not really harm your cat and may cause them to reconsider engaging in the action again. You may further add some apple cider vinegar to the water. The smell of it definitely turns them off.

Similar to toddlers, your message will only be remembered if it is repeated repeatedly. Be prepared to use these methods to deal with your cat’s behavior. In this way, your feline pals will start to comprehend how their actions are related to the results.