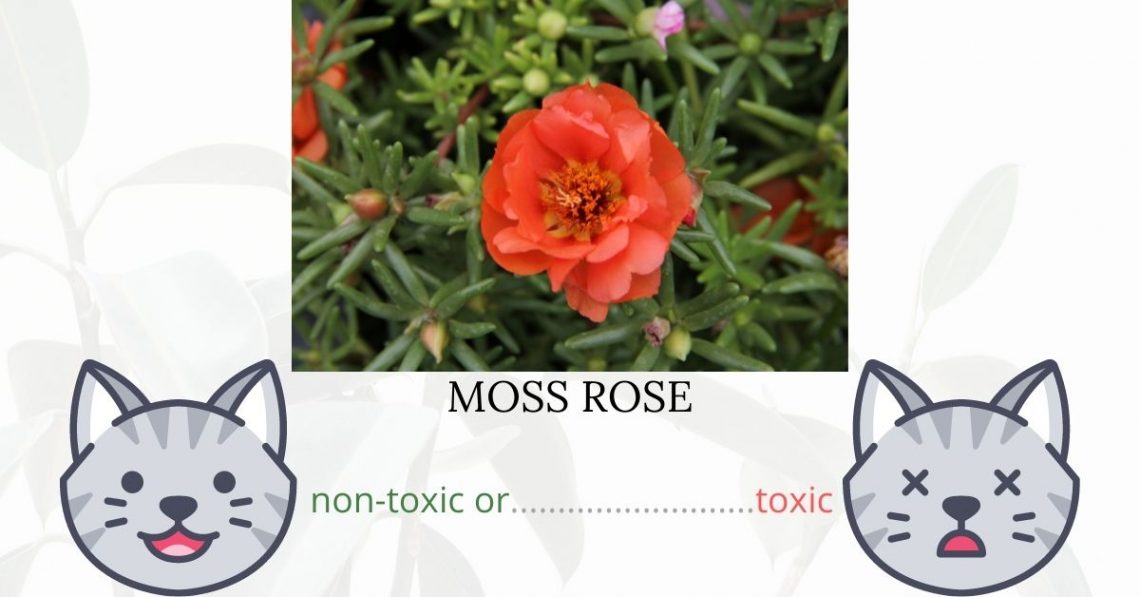 Moss rose is a typical garden plant that has brightly colored blossoms. It should be mentioned, however, that this plant contains soluble calcium oxalates, which are poisonous to cats. These calcium oxalates can cause severe symptoms and possibly renal failure if taken in large enough quantities.

The highest quantity of soluble calcium oxalates is found in moss rose leaves. This poisonous plant is rarely consumed in considerable quantities by cats because symptoms appear fast. However, because ingesting any component of the moss rose can cause life-threatening renal failure symptoms, seek medical help right once if you suspect your cat has ingested any part of the moss rose in any quantity.

What Is Moss Rose or Portulaca?

Moss rose is also commonly known as wild portulaca, rock moss, purslane, pigwee, and pusley. Scientifically known as portulaca oleracea, it is a drought-tolerant annual succulent native to South America that produces rose-shaped flowers which grow in pink, orange, yellow, cream, white, red, and multi-color open during the day and close as the sun goes down.

Clinical Signs of Moss Rose or Portulaca Poisoning in Cats

The extremities of moss rose poisoning symptoms are determined by the amount of oxalis consumed, as well as the cat’s general wellness. Cats with chronic renal illness are more vulnerable. Symptoms of moss rose poisoning usually occur within two hours after consumption and can be fatal. Here are the common indicators that you should monitor:

The common procedures used to treat mild cases of moss rose poisoning may involve inducing vomiting, commencing intravenous fluid therapy, using activated charcoal to remove toxins in the cat’s stomach, and giving medicines to reduce recurrent vomiting are some of the treatment options of the veterinarian. Other medications and procedures may also be administered depending on the cat’s symptoms.

Recovery from Moss Rose or Portulaca Poisoning in Cats

The prognosis for a cat’s recovery depends on how quickly the poisoning was discovered and treated after ingestion, as well as whether or not kidney failure developed. Mild cases of moss rose poisoning that are treated immediately and effectively usually go away within 24 hours. In case of kidney damage, the veterinarian may require follow-up visits to the clinic to check the cat regularly.

Prevention of Moss Rose or Portulaca Poisoning in Cats

Poisoning can only be avoided by not planting toxic plants in your house or yard. Limiting your cat’s access outdoors can also lessen the possibility of wandering outside and encountering a moss rose or other poisonous plants. Cat owners should do their research before bringing any plants home.