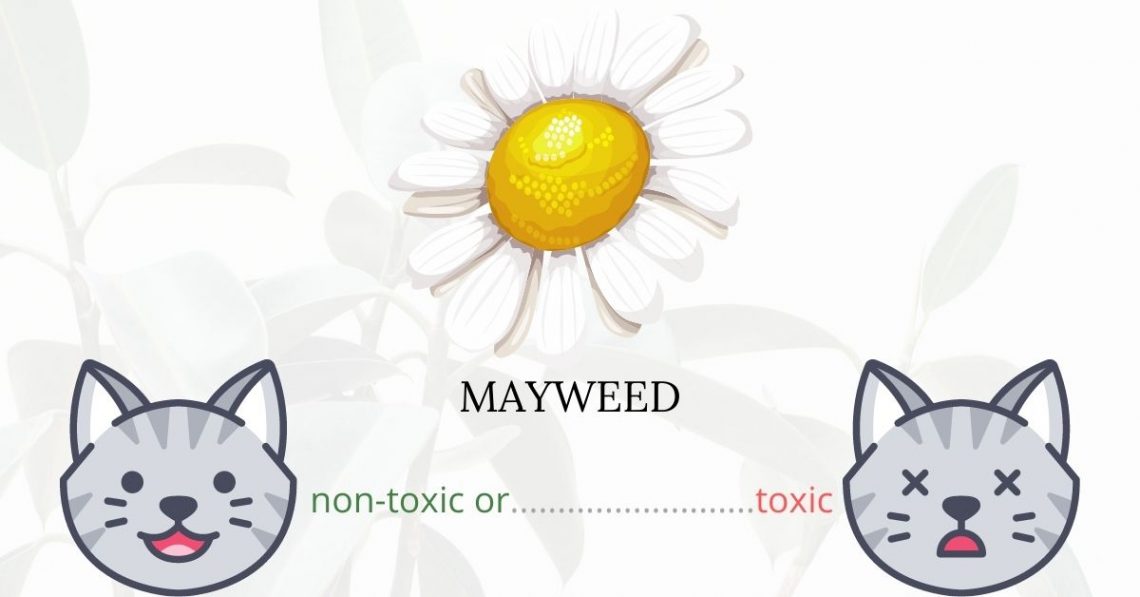 Mayweed is considered an invasive plant thus can be found growing in many places. that can be found growing in a variety of locations. Roadsides, fields, wastelands, and crops are the most typical places for mayweed to flourish. This means that cats who are likes to go outside, particularly in rural regions, are more likely to come into touch with the plant.

Terpenoids, volatile oil, flavonoids, coumarins, chamazulene, and anthemic, tannic, and fatty acids are among the poisons found in mayweed. Mayweed poses a concern to cats because of these poisons, albeit life-threatening incidents of intake are uncommon. When eaten or contacted by the skin of a cat, several of the toxins are known to cause allergic reactions. Mayweed is unpalatable due to the various poisons in it, which deters most cats from eating large amounts of it.

What Is Mayweed or Poison Daisy?

Mayweed or scientifically called Anthemis cotula of the Asteraceae plant family is an invasive annual plant that has spread throughout the United States. Mayweed blossoms have bright yellow centers surrounded by white petals, like daisies, but their perfume is pungent and typically disliked. Mayweed is also known as stinking chamomile or poison daisy as a result of this. Mayweed is a Mediterranean weed that has rapidly expanded throughout the country due to its resilience and high germination rate. It is currently categorized as a noxious weed because of its capacity to take over agricultural lands.

Clinical Signs of Mayweed or Poison Daisy Poisoning in Cats

A long period of ingestion or exposure may cause cats to develop severe poisoning symptoms. Mayweed poisoning may be topical or through ingestion and typically includes the following symptoms:

Although mayweed poisoning is rarely fatal, medication may be required to alleviate the cat’s symptoms and promote a speedy recovery.

Recovery from Mayweed or Poison Daisy Poisoning in Cats

In the majority of mayweed poisoning, cats fully recover quickly. The usual symptoms are only mild and will cease in a few hours up to 24 hours after treatment. Give your cat time to rest as he is recuperating at home.

Prevention of Mayweed or Poison Daisy Poisoning in Cats

Due to the weed’s ability to grow practically anywhere, confining your cat indoors may be the best method to prevent plant poisoning.

It is better to get rid of Mayweed if you see it on your property or in the nearby area before it spreads. Investigate the recommended methods for removing it, and if possible, do so naturally.