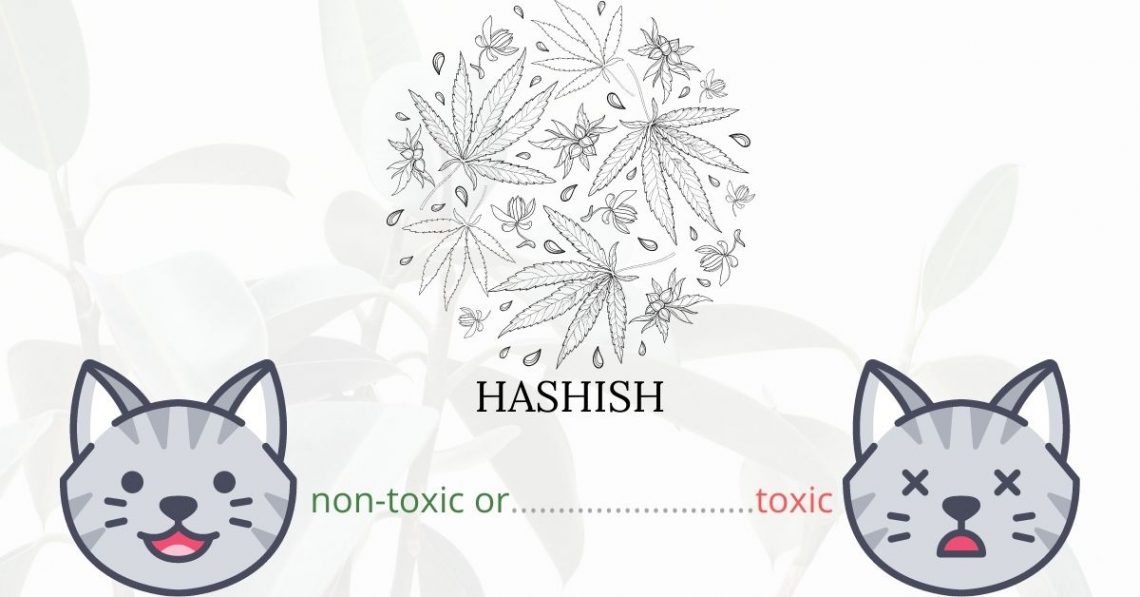 Hashish, also often called hash, is a cannabis extract made from compressed or purified formulations of the plant’s stalked resin glands, known as trichomes. Although it is generally safe for humans and is widely used as a recreational drug, the compounds found in hashish can be severely poisonous and can be even lethal to a variety of animals, including cats.

The toxic principle found in hashish is high concentrations of THC or tetrahydrocannabinol. THC primarily causes an imbalance in the brain’s receptors. The effects of this imbalance on humans can be highly pleasant, causing euphoria and even utilized to shut out negative emotions like pain and anxiety. However, in cats, this receptor imbalance can have a neurotoxin-like effect, resulting in a loss of control over motor activities and an inability to regulate physiological processes. Ingestion of hashish can cause vomiting, pupillary dilation, low blood pressure, and seizures in cats among other symptoms.

Hashish is a narcotic manufactured by compressing and processing components of the cannabis plant, with the greatest trichomes being concentrated in flowering buds. It is usually smoked in a pipe, bong, vaporizer, or joint, but it can also be eaten. In nations like Morocco, Pakistan, Afghanistan, India, Iran, Israel, and Lebanon, hash has a long history of use. In Europe, hash consumption is also prevalent. Dried flowers or concentrates are more prevalent in the United States, while hash has grown in popularity as a result of recent legal reforms.

When a cat consumes hashish, the symptoms may appear relatively quick. Cat owners should keep track of the symptoms’ course and features since this information can greatly aid a veterinarian in diagnosing the illness.

First Aid and Treatment of Hashish Poisoning in Cats

There is no direct treatment for cats who have been poisoned by hashish. As a result, the doctor would most likely adopt a mitigation plan to prevent future worsening of the symptoms until the THC is naturally excreted from the cat’s system. To absorb any remaining trace parts of THC, the initial step will be to either pump the cat’s stomach or deliver a dose of activated charcoal. Then, intravenous fluid therapy will be initiated to replenish fluids lost due to vomiting as well as to flush toxins from the cat’s body by inducing urine.

Recovery from Hashish Poisoning in Cats

Recovery of your cat may take time particularly if he or she suffered from severe poisoning. Keep him or her comfortable indoors and limit his physical activities. Continue giving plenty of fluids to clear up his or her stomach. Make sure to follow your veterinarian’s orders about post-treatment care.

Prevention of Hashish Poisoning in Cats

Keep all types of cannabis, whether medical or recreational, out of your pet’s reach. When not in use, consider storing toxic items in high and locked cabinets or drawers. Keep your cats away from secondhand smoking in a separate, well-ventilated room. Cats have a keen sense of smell and may be enticed to eat candy, chips, chocolates, and cannabis if they are easily obtainable. Take your cat to your veterinarian or the nearest emergency veterinary hospital for treatment if you detect strange behavior in your pet and suspect cannabis exposure.