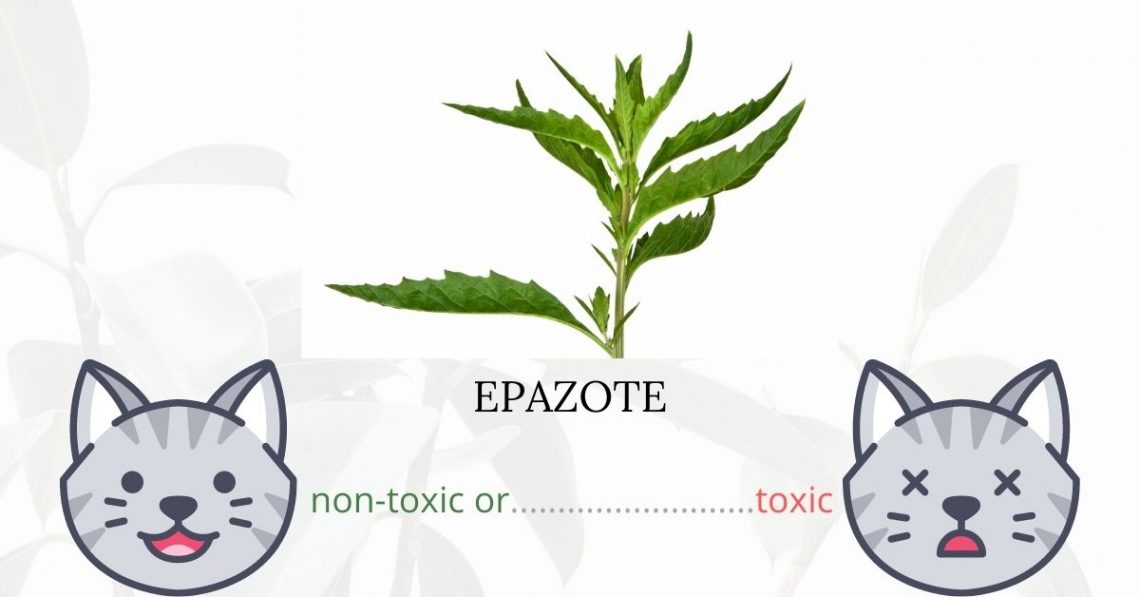 Epazote or also commonly known as wormseed, Jesuit’s Tea, Mexican Tea, and Paico is a perennial plant that contains oxalates, nitrates, cyanogenic glycosides, and ascaridole. These substances cause gastrointestinal upset and cardiac irregularities in cats.

The potential for these plants to be harmful is a result of the environmental variables present during their growth, rather than the poisonous compounds that they naturally produce. Many species in this genus do include oxalates, saponins, and cyanogenic glycosides, which are chemicals that can naturally occur in potentially fatal concentrations in other plant species. However, under normal growth conditions, the concentrations are usually too little to cause any harm or be toxicologically significant in this genus.

What Is Epazote or Wormseed?

Scientifically known as chenopodium ambrosioides, epazote is a tropical Americas annual or short-lived perennial. Both the stems and the leaves contain minute glands that secrete an aromatic oil with a musky, slightly putrescent odor. It grows in disturbed regions of cultivated fields, along roadsides, streamsides, and in waste areas.

The main stems and smaller side stems of epazote end in 1 inch long spikes of stemless blooms with tiny leafy bracts intermingled. Greenish flowers are placed in dense clusters along with these spikes from mid-summer to October. Epazote is generally used as a medicinal herb in the past times and nowadays is also used in culinary as herbs.

Clinical Signs of Epazote or Wormseed Poisoning in Cats

Epazote is highly poisonous to cats if ingested in a substantial amount. The following clinical signs are indicators of epazote poisoning:

First Aid and Treatment of Epazote or Wormseed Poisoning in Cats

It is important that the mild symptoms be addressed immediately before your cat’s situation worsens. Veterinary treatment may include intravenous fluid therapy, inducing vomit, activated charcoal, and gastric lavage, depending on your cat’s needs.

The most common treatment for nitrate poisoning is methylene blue. Methylene blue converts non-oxygen-carrying methemoglobin to hemoglobin quickly by decreasing the ferric iron in hemoglobin to the ferrous state, allowing the blood to accept and transport oxygen to the body’s important organs once more.

It has been proposed that taking mineral oil orally as a cathartic can aid accelerate defecation, reducing the amount of time high nitrate material stays in the gastrointestinal system and is available for conversion to nitrite.

Recovery from Epazote or Wormseed Poisoning in Cats

The prognosis will range from promising to guarded if therapy is started promptly and continued for a significant amount of time, and the high nitrate source can be eliminated. Symptoms may still occur for up to a week or longer. Ensure to follow your veterinarian’s orders after treatment for your cat’s fast recovery.

Prevention of Epazote or Wormseed Poisoning in Cats

Build additional security in your houses such as high fences and safety nets to restrict your cat’s access outdoors and prevent them from straying away from home. Keep them safe, healthy, and comfortable inside your house.