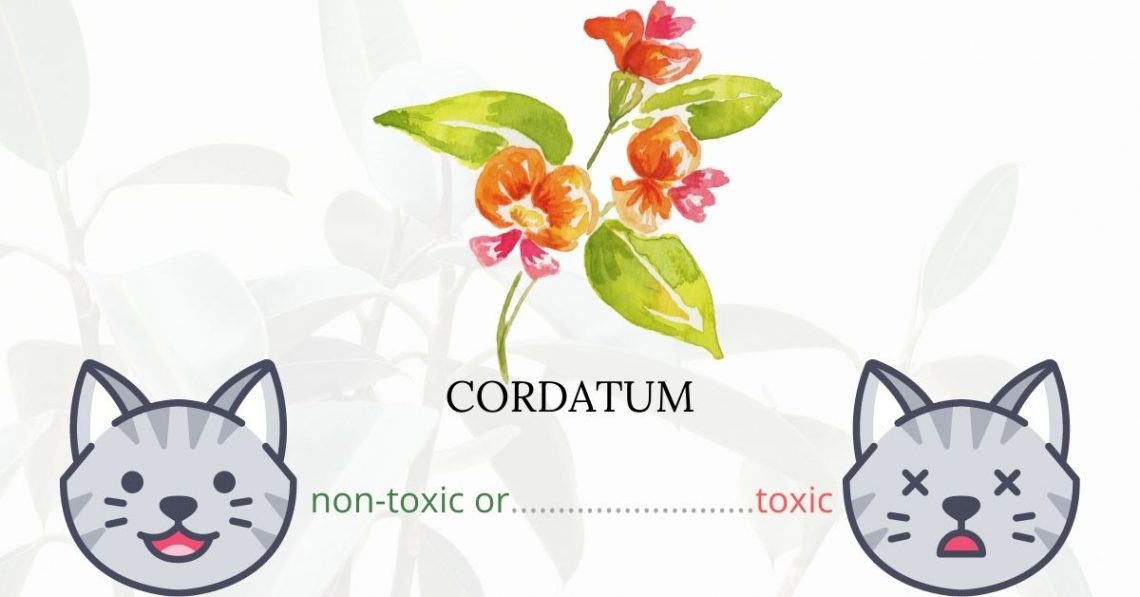 Cordatum is also known worldwide for its other common names Fiddle-Leaf, Horsehead Philodendron, Heartleaf Philodendron, Panda Plant, Split Leaf Philodendron, Fruit Salad Plant, Red Emerald, Red Princess, Sweetheart Plant, and Saddle Leaf. It is widely grown as a houseplant which makes it accessible to cats however, cat owners should note that heartleaf philodendron contains insoluble calcium oxalates similar to other members of the Araceae family. These oxalate crystals to the mouth and gastrointestinal tract of cats. Consuming heartleaf philodendron may cause drooling, oral pain, and vomiting among other symptoms in cats.

What Is Cordatum or Heartleaf Philodendron?

Scientifically called Philodendron oxycardium, cordatum is a popular houseplant native to South and Central America that provides year-round beauty.  It has a romantic connotation due to its heart-shaped leaves and it is frequently presented as an anniversary gift.

Some cordatum varieties have broad, lengthy, split leaves, while others have tear-dropped leaves. These plants are frequently placed on coffee tables and shelves, where they gracefully spill out. They thrive indoors and are hardy, which is one of the numerous reasons why homeowners bring them inside for decoration. The cordatum leaves are dark green, but they are often bronze-colored when they initially emerge, giving this plant a lot of aesthetic intrigues. A mature plant may produce little greenish-white blossoms on rare occasions.

Clinical Signs of Cordatum or Heartleaf Philodendron Poisoning in Cats

Cordatum or Heartleaf Philodendron poisoning may only cause mild to moderate symptoms however if you see your cat consuming a part of this plant, getting in touch with a veterinarian is still important. Typical signs of cordatum poisoning in cats are:

Any heartleaf philodendron residue that remains in your cat’s mouth must be rinsed away. Once the oxalate crystals have been removed, you may offer milk, yogurt, or any other form of calcium to help dissolve some of the calcium oxalate crystals and relieve pain. If your cat shows signs of swelling or difficulty breathing, contact your veterinarian immediately.

Symptomatic veterinarian treatment may involve removing the plant from the mouth, anti-vomiting drugs, hydration therapy, pain relievers, and, in rare cases, airway obstruction management. Once your cat’s airway is closed due to swelling, the veterinarian may keep your cat under observation in the veterinary office.

Recovery from Cordatum or Heartleaf Philodendron Poisoning in Cats

Generally, cats who have ingested a huge amount of heartleaf philodendron develop severe symptoms that can last up to two weeks. The majority of cats who experienced mild to moderate symptoms usually recover within 24 hours. Take preventive measures to avoid another poisoning incident in your cats.

Prevention of Cordatum or Heartleaf Philodendron Poisoning in Cats

Avoid growing heartleaf philodendron within the surroundings of your house. If you received this plant as a present, it is better to gift it away or put it in a place that your cat cannot access. To prevent exposure to toxic plants outdoors, keep your cats safe and secured inside your home. You may keep your feline babies inside a playpen or a cat house. Some cat owners also build additional fences and install safety nets around their houses to minimize their cat’s access outdoors.