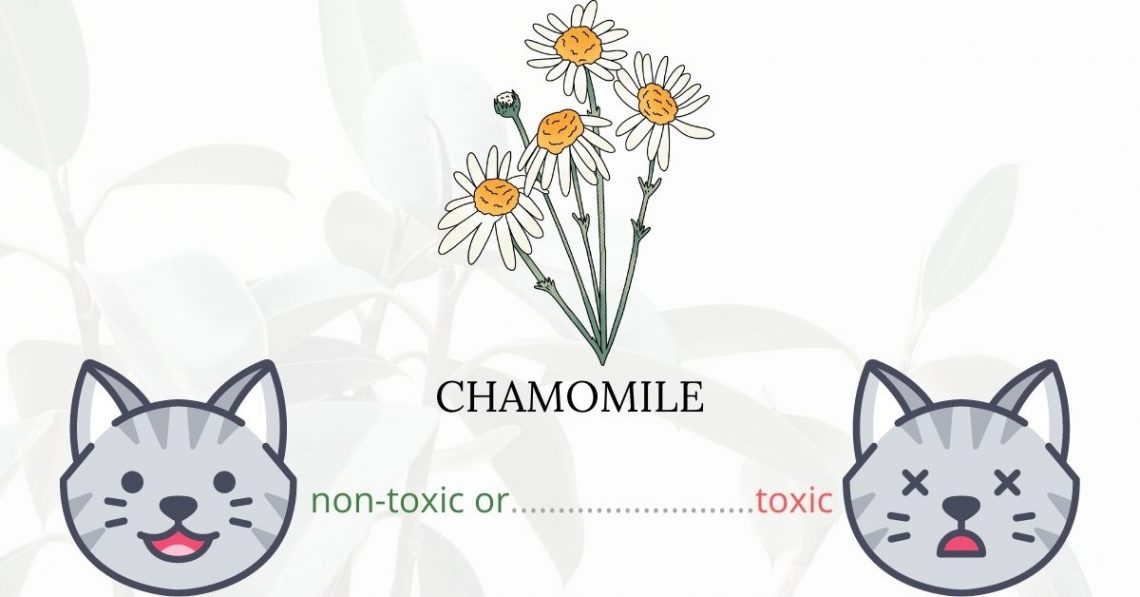 Chamomile or also known for its other common names Manzanilla, Garden Chamomile, Roman Chamomile, True Chamomile, Corn Feverfew, Barnyard Daisy, Ground-apple, and Turkey-weed has been commonly used as herbal medicine for a long time. However, chamomile may cause poisoning to cats if a large amount of the plant has been ingested. Chamomile plant contains volatile oil, bisabolol, chamazulene, anthemic acid, and tannic acid which might cause allergic reactions, diarrhea, vomiting, and bleeding to cats if ingested over a lengthy period of time.

Scientifically known as Anthemis nobilis from the aster family of Compositae, chamomile is usually grown as ornamental plants. They have distinct yellow or white ray flowers in compact flower heads, as well as yellow disk flowers. Chamomile is also popularly used in teas, as a tonic and an antiseptic, as well as many herbal remedies

In most cases, cats suffer from allergic reaction due to chamomile’s toxic principles. Long-term consumption of chamomile can lead to bleeding tendencies in cats. Symptoms that may prevail includes:

First Aid and Treatment of Chamomile Poisoning in Cats

Treating chamomile poisoning in cats requires eliminating the plant’s toxin from the cat’s system.  The veterinarian will most likely inject activated charcoal if your cat has not vomited yet. Activated charcoal binds to the poisonous substance, preventing the cat’s body from absorbing the plant compounds further. The vet may also prescribe medications such as Kapectolin and Sucralfate for your cat’s stomach.

Recovery from Chamomile Poisoning in Cats

Just like in all cases of plant poisoning, as long as the cat received immediate and proper treatment, he or she will fully recover quickly. In chamomile poisoning cases, most cats recover completely within 24 hours.

Prevention of Chamomile Poisoning in Cats

Cat owners should avoid bringing chamomile inside their homes and even growing them in their gardens and yards to prevent poisoning in their cats. Build fences and install safety nets in the surroundings of your house to restrict your cat from straying away.