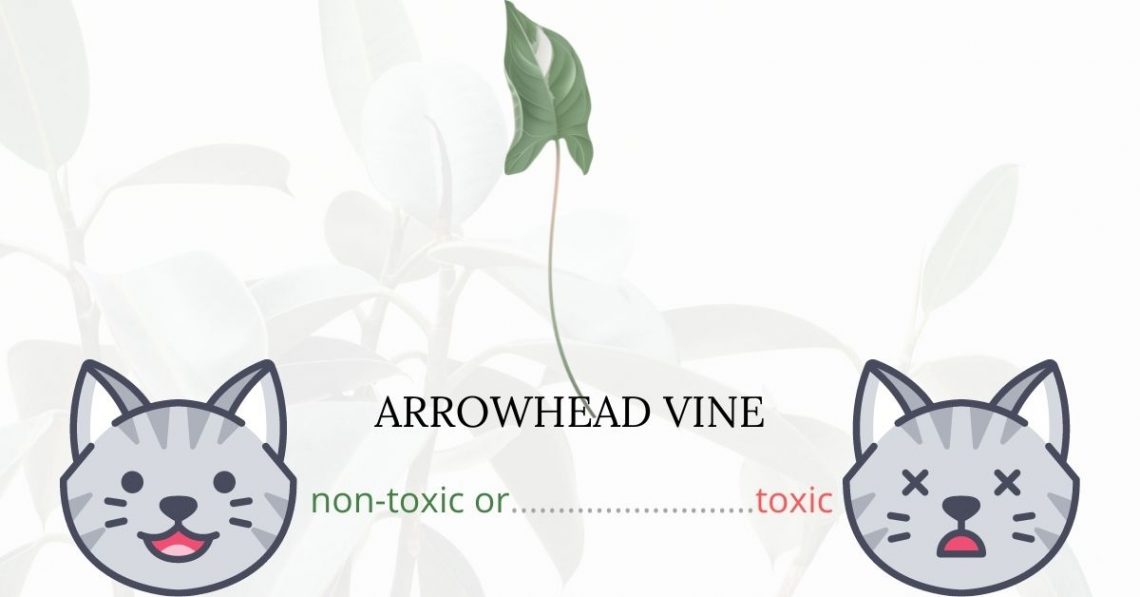 Arrowhead vines or also commonly known as Nephthytis, Green Gold Naphthysis, African Evergreen, and Trileaf Wonder, are climbing vine that contains insoluble oxalate crystals. These oxalate crystals are released when your cat chews this plant, causing tissue penetration and discomfort in the mouth and oral cavity. In rare cases, arrowhead intoxication may lead to blocked airways due to swelling.

What Is An Arrowhead Vine?

Scientifically known as Syngonium podophyllum, arrowhead vines are native to South America but are now cultivated in many other countries with a plethora of variations with leaf colors ranging from green to almost white. This plant which is part of the Araceae family matures into a climbing vine, so most growers usually cut and pinch out stems to avoid wild growth and difficult management indoors.

Indigenous tribes usually use arrowhead vines as medicinal herbs to cure headaches, indigestion, and different skin disorders. Nowadays, it is a known ornamental plant that may be grown both outdoors and indoors. However, it is not advisable to have arrowhead vines in your home if you have a cat as it is poisonous for them when ingested.

First Aid and Treatment of Arrowhead Vine Poisoning in Cats

Getting rid of toxins is the primary goal in treating arrowhead vine poisoning in cats. The irritation caused by the production of oxalate crystals can be relieved by rinsing your cat’s mouth and oral cavity with cool water. The veterinarian may administer antihistamine to minimize oral swelling that causes difficulty in breathing.

If your cat has been vomiting, the doctor will monitor him closely to ensure that his electrolyte levels are balanced and that his vital signs are stable. Anti-vomiting medication may also be prescribed by your cat’s veterinarian. Veterinarians commonly prescribe Sucralfate and Kapectolin to preserve your cat’s stomach lining and avoid vomiting.

After receiving proper veterinary care, cats poisoned by arrowhead vines recover completely. Depending on the severity of condition, the vet may ask you to leave your cat in his care so that he may monitor his vitals and ensure that he is in stable condition before allowing him to return home.

Prevention of Arrowhead Vine in Cats

It is advisable to remove arrowhead vines in your backyard if you have it but since they are common it is possible that your cat will be exposed again to it as long as he or she wanders outside your home unsupervised. Thus, it is best to keep your cats indoors to reduce the risk of getting posioned by arrowhead vines or any other toxic plants. Additionally, you can make your home cat-friendly by growing these non-toxic plants for your cats.