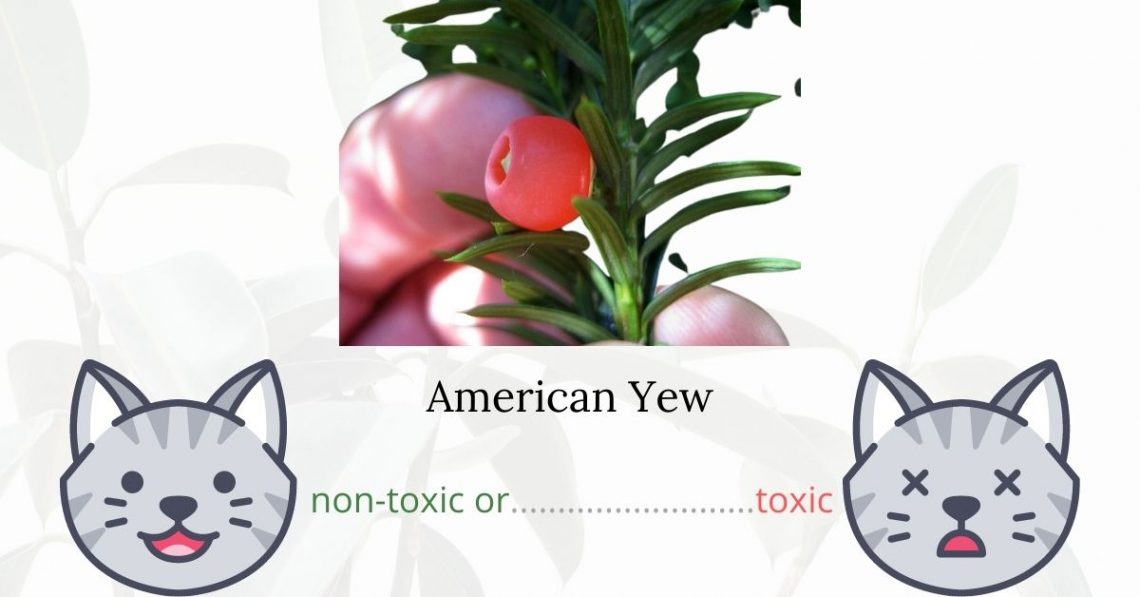 American Yew or also called Canada yew, dwarf yew, ground hemlock, or creeping hemlock contains a toxic substance called taxine. Taxine is present in all parts of the yew, but the seeds contain most of it.  Ingesting American yew is dangerous for felines and may cause tremors, difficulty breathing, vomiting, and may even lead to sudden death from acute heart failure. Do not wait any longer and go to a veterinarian once you notice any of the said symptoms.

What is American Yew?

Scientifically known as Taxus canadensus, this Evergreen shrub-like plant is native to Central and Eastern North America. This plant from the Taxaceae family is mostly used in making wreath decors. Known to be the hardest of the yew species, provides excellent ground cover in forested areas. It is usually about one meter tall and has small yellowish-green leaves that taper abruptly to a tiny point.

Asking immediate veterinary care is crucial as American yew poisoning may progress to heart failure. If you are not sure the possible causes of the showing symptoms, the vet will be able to detect traces of taxine and yew after checking the cat’s stomach.

These are the symptoms you should look out for in your cats:

First Aid and Treatment of American Yew Poisoning in Cats

Treatment for critical conditions like American yew poisoning must begin as soon as possible after a diagnosis to prevent it from progressing to grave condition. The cat may need to be put on a ventilator and given IV fluids to avoid dehydration and electrolyte imbalance.

(1) induction of vomit, to remove the remaining parts of the American yew in the cat’s system, (2) gastric lavage, which is a process to wash the cat’s stomach cavity, and (3) administering activated charcoal, to absorb and pass out any residue of toxins in the cat’s system. After treatment, the vet will most likely require to leave the cat in his care so he can closely monitor the cat’s condition, particularly the heart.

The earlier your cat receives medical treatment, as with most poisoning situations, the more likely he is to recover. Ensure your cat’s hydration once you get home to continue clearing out his stomach. The vet may also recommend some changes in your cat’s diet as he or she is in recovery period.

Cats who are always outdoors are at more risk of exposure to American yews. It is better to make them busy indoors and maintain their healthy condition by providing sufficient supply of food and water. You can also try building fences and putting nets around your home to prevent them from wandering away