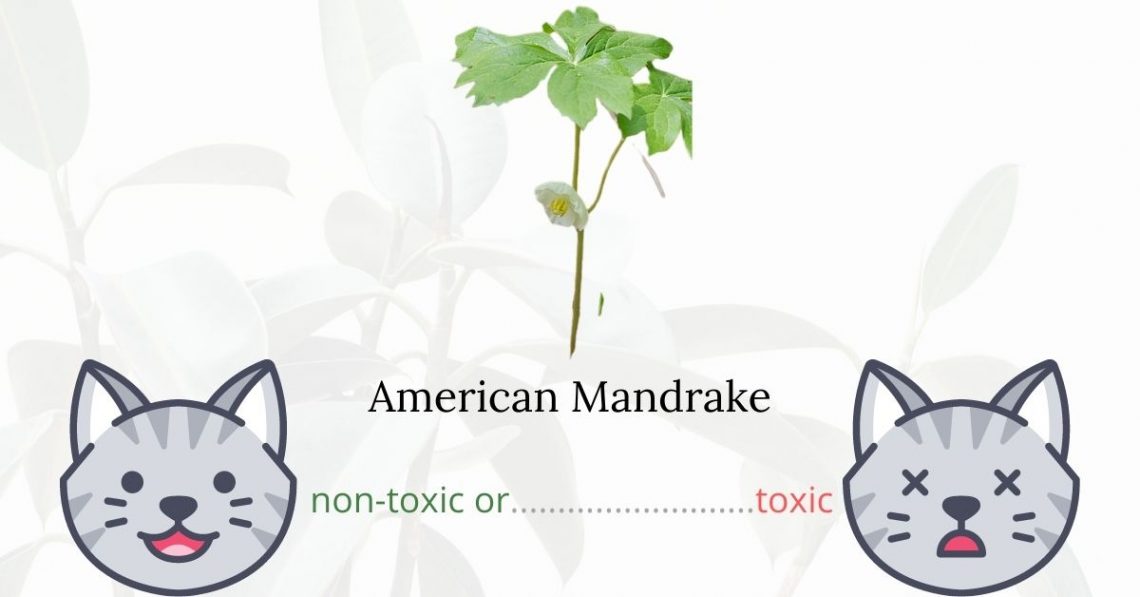 The American mandrake or mayapple is a highly poisonous plant that contains profuse hallucinogenic tropane alkaloids such as hyoscyamine, apoatropine, scopolamine, and atropine. The alkaloid atropine is the toxic component of the American mandrake that offers the biggest health risk to cats. When atropine enters a cat’s body, its nerve receptors are unable to release their stimulating chemical, acetylcholine, and the nerve pulse is not transmitted to the next nerve, thus affecting the parasympathetic division of the central nervous system.

What is American Mandrake or Mayapple?

American mandrake is scientifically known as Podophyllum peltatum and is also known for its other common names Mayapple, Indian Apple Root, Umbrella Leaf, Wild Lemon, Hog Apple, Duck’s Foot, and Raccoonberry. It is from Berberidaceae family and native to eastern North America, most common in Minnesota and Texas.

American mandrake grows around 1.5 to 2 feet tall, with two or three palmately lobed leaves measuring 8-11 inches across. Each stem at the anterior end of the two leaves usually bears a white flower with six up to nine petals. The blossoms grow into a 1 to 2 inch long greenish-yellow fruit.

In around 30 to 60 minutes after ingesting the American mandrake herb, a cat will begin to show clinical signs of poisoning. As the poisons make their way down to the urinary and digestive systems’ elimination pathways, these clinical indications can linger anywhere from 24 to 48 hours.

Once the poisons from the American mandrake have reached the cat’s brain, the following clinical symptoms will appear:

First Aid and Treatment of American Mandrake Poisoning in Cats

The primary goal of treating American mandrake poisoning in cats is to get the substance out of the cat’s system before it causes complete shutdown of involuntary muscles. If the cat is still conscious, the veterinarian will administer vomiting medication; however, if the toxins have rendered the feline unconscious, gastric lavage may be used to empty the stomach. Other treatment options may include administering activated charcoal, oxygen, and fluid replacement therapy.

Death due to American mandrake poisoning is a rare case. As long as the cat received immediate and appropriate treatment from a veterinarian, he or she will fully recover within 24 to 36 hours.

Ensure that your cat is provided with adequate food sources, as most cats will only eat this plant as a last resort. If the American mandrake is ingested, common symptomatic care is most likely all that is required. Prevent further plant ingestion by flushing the mouth with water and consulting a veterinarian.