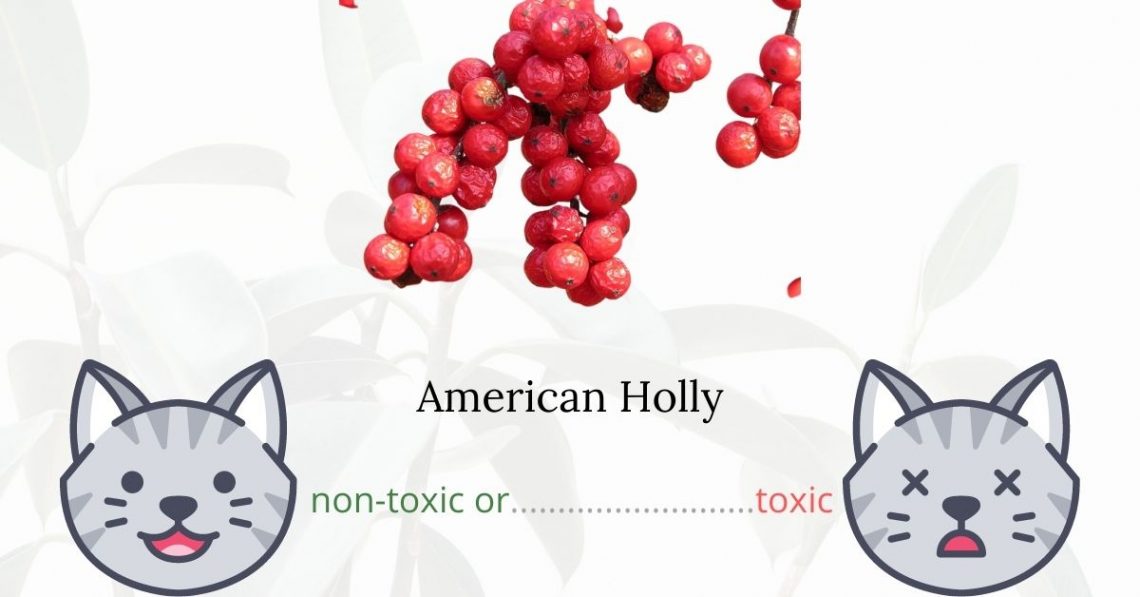 American holly or more commonly known as holly contains cyanogens, methylxanthines, and saponins which are toxic and potentially lethal substances. It is also known for its other common names: winterberry, inkberry, organ holly, Christmas Holly, European holly, and English holly.

The holly plant’s leaves and green berries contain the highest concentration of glycosides. Saponins have the ability to cause red blood cell death as well as changes in the permeability of small intestinal mucosal cells. Although the leaves and berries have a minimal amount of toxicity, the plant’s impact on a cat can be harmful to his or her health.

What is American Holly?

American holly is scientifically known as Ilex opaca from the Aquifoliaceae family. It is widely grown throughout the world’s temperate and subtropical regions. Due to its bright red berries and dark green, spiny leaves, which are usually used in Christmas wreaths, garlands, and displays, American Holly is commonly referred to as Christmas holly.

Ingestion of American holly causes poisoning to cats. Cyanogens, methylxanthines, and saponins are found in its spiny leaves. These chemicals induce severe gastrointestinal distress, including vomiting and diarrhea when consumed. Other symptoms to look out for in your cats are:

Immediate attention and veterinary care are important to ensure your cat’s fast recovery. Any residue of the ingested holly plant must be removed from your cat’s system so treatment may include vomit-inducing. The spines on the leaves of the American Holly are known to irritate the esophagus, Kapectolin may be used to coat the lining of the throat and stomach. Fluids may also be administered by the vet to replenish the feline’s hydration if he or she suffered from vomiting and acute diarrhea.

There is no record that confirms cat deaths as a result of Holly consumption. American Holly has a minimal level of toxicity, and almost all cats recover completely within 24 hours. It might take more time for your cat to heal if he or she has not taken any veterinarian care.

Since holly is common in households particularly during holidays, it is highly advisable to remove all of the berries from any decorations before bringing them into your house to prevent your cat from accidentally ingesting them.