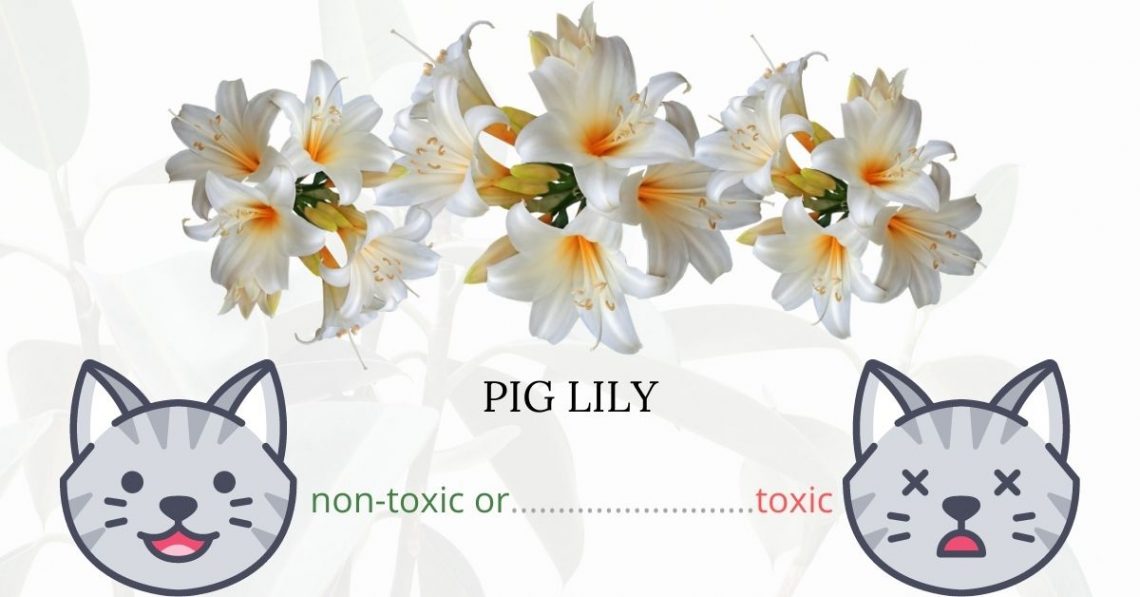 The pig lily contains insoluble calcium oxalates which are similar to other plants from the Araceae plant family. The plant produces these oxalates to protect itself from herbivores. The crystals will adhere to the animal’s tissues after being swallowed, causing significant inflammation. After the crystals reach the stomach and bind to its lining, discomfort, swelling, and redness in the mouth, as well as vomiting, may occur in cats.

What Is Pig Lily?

Pig lily is a flowering plant that can reach a height of three feet and a width of two feet. It can thrive in colder temperatures and can withstand moisture. As a marginal aquatic, this plant can be grown. Its preferred habitat is along the sides of streams and ponds.

Pig lilies, scientifically known as Zantedeschia aethiopica, are native to South Africa, where the plant’s rhizome or underground stem has long been used in traditional medicine. The pristine white blossoms of pig lilies are frequently used as symbols of devotion at weddings. They’ve also been used at funerals to represent the purity of a departed soul, with a rebirth connotation.

Almost immediately after chewing the pig lily, the cat will begin to experience significant symptoms that will prevent it from ingesting more plants. Common symptoms that may occur are the following:

First Aid and Treatment of Pig Lily Poisoning in Cats

If a cat has eaten a pig lily, remove any leftover plant from its mouth and flush it with clean water. Feeding your cat a yogurt-based food for a few days will relieve the discomfort while also dislodging the crystals stuck in the intestines. If the symptoms persist, the veterinarian may decide to start the cat on intravenous fluid treatment to replace lost fluids and counteract the effects of dehydration.

Other treatments may also be done by the veterinarian depending on the cat’s illness. Activated charcoal may be administered and gastric lavage may also be performed. Medications to ease other symptoms may also be given by the vet.

Most cats recover quickly from pig lily poisoning, with most regaining their health in less than a week. However, older cats’ digestive systems may take longer to fully recover.

After treatment, discuss post-care treatment with the vet. He may recommend changes in the cat’s diet as its stomach is still sensitive to the treatment.

Remove any pig lilies from your gardens and keep them out of your house. Limiting your cat’s access to the outdoors reduces the likelihood of your cat coming into contact with pig lilies and other harmful plants that may be blooming in your area.