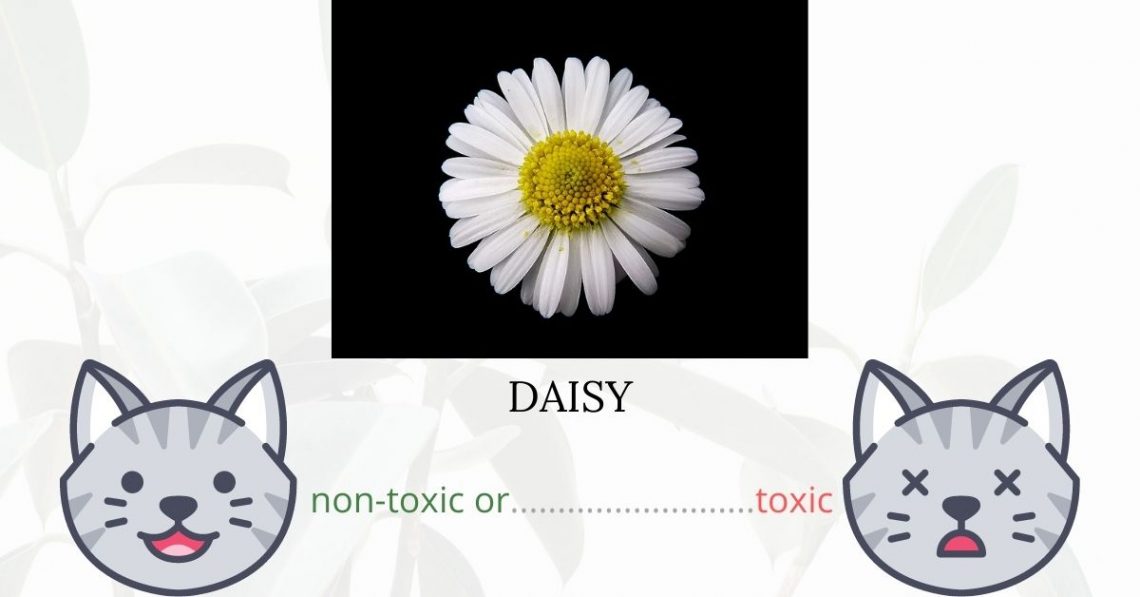 Daisy is a very popular flowering plant in many parts of the world. While it may look pretty inside your homes, cat owners should take note that these flowers are poisonous for your feline companions. Daisies contain sesquiterpene, lactones, and pyrethrins among other irritants. Sesquiterpene causes skin irritation and hypersalivation and also contributes to vomiting, diarrhea, and gastrointestinal tract bleeding. Pyrethrins and lactones, on the other hand, affect the nervous system which results in a cat’s lack of coordination, and in the worst case, may eventually lead to death.

Daisy which is frequently confused with other species from other members of the Asteraceae family is also called common daisy, lawn daisy, or English daisy. Daisies are native to western, central, and northern Europe, as well as distant islands such as the Faroe Islands, but they have spread to most temperate regions, including the Americas and Australasia.

Daisy is a herbaceous perennial with short crawling tubers and rosettes of small spoon-shaped leaves that grow flat to the ground and range in length from 3/4 to two inches. The position of the sun in the sky is followed by the daisy blossoms, a phenomenon known as heliotropism. Daisy grows well in lawns and is difficult to eradicate with mowing, hence the name “lawn daisy.”

Symptoms of poisoning from a daisy plant are almost the same symptoms that cats display in other plant poisonings. Thus, unless you caught your cat grazing on a daisy, you cannot point out the exact cause of the symptoms he or she is manifesting. Some the clinical signs that your cat may experience if he or she ingested a potion of a daisy plant are:

First Aid and Treatment of Daisy Poisoning in Cats

The most effective treatment for poisoning is to begin fluid therapy for the cat right away. The vet can induce many of the toxins existing in the cat’s body to be eliminated by urination and dilute the chemicals that have been digested into the bloodstream by giving more liquid to the cat’s body. Furthermore, fluid therapy will aid in the relief of dehydration symptoms that may be induced by prolonged vomiting and diarrhea.

If the cat’s refusal to food persists, it may be required to administer medications that protect the stomach lining from digestive acids, preventing further damage and inflammation. To address the other symptoms that your cat may be experiencing, the veterinarian may prescribe and administer other medications depending on your cat’s specific needs.

Recovery from Daisy Poisoning in Cats

The majority of cats poisoned by consuming daisies will recover quickly, with most symptoms disappearing in less than a week. However, owners should be aware of their cat’s need for rest and should feed them bland food, as well as limit their cat’s activity for several days after the poisoning. In more serious circumstances, a cat may require additional visits to the veterinarian to check their development, as well as owner surveillance to ensure that they do not suffer from the more serious side effects of pyrethrin intake.

Prevention of Daisy Poisoning in Cats

Daisy plants are not advisable to be placed in households with cats living in them. It should be removed from your yards and gardens to avoid another poisoning episode of your cat. You may confine your cat inside a cat cage or play fence to keep them safe and busy indoors. The less time your cat spends outdoors, the lesser the chance he or she will encounter a daisy plant or even other toxic plants.