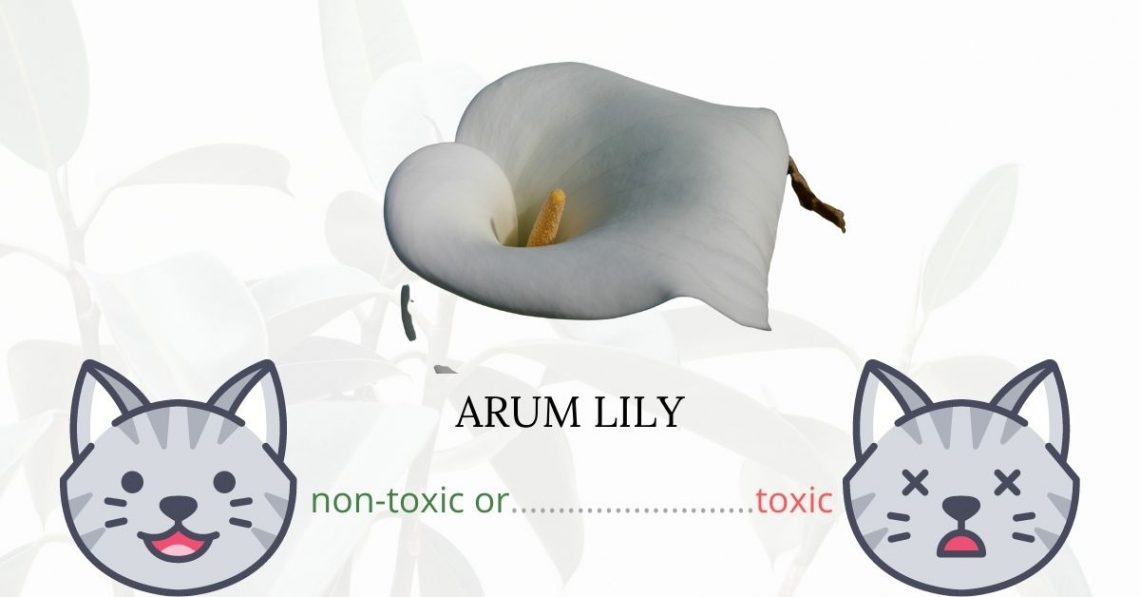 Lilies, in general, are toxic and even lethal for cats — arum or calla lilies included. Arum or calla lilies also contain insoluble calcium oxalates just like other plants under the araceae family. These oxalates penetrate tissues which commonly causes mouth irritation and swelling in cats. Arum lily or calla lily poisoning requires immediate veterinary treatment as these symptoms may lead to kidney failure.

What Is An Arum Lily or Calla Lily?

Arum Lily has many common names such as calla lily, pig lily, white arum, trumpet lily, florist’s calla, and garden calla. Scientifically known as zantedeschia aethiopica, it is one of the most beautiful bulb flowers. It has large showy funnel-shaped white spadix flowers that are usually gifted as bouquets. It is native to South Africa and ideally grows in water bodies like ponds and stream banks.

Arum lily poisoning in its later stages frequently results in lifelong liver and kidney damage. Get your cat to the clinic as soon as you think it may have been poisoned by ingesting, licking, or brushing up against an arum lily. Within two hours of exposure, the first signs of poisoning may appear. Here are the symptoms to look out for in your cats:

The veterinarian may give medications to ease swelling of your cat’s airways and flush out remaining toxins from your cat’s stomach. Treatments to prevent kidney failure is also essential as permanent your cat is at risk of getting permanent kidney damage. Fluids will be also administered intravenously to prevent dehydration of your cat.

Your cat is at risk of having an anaphylactic reaction as a result of ingesting or being exposed to arum or calla lily thus, your cat will need to be closely monitored by a veterinarian.

Recovery from Arum Lily or Calla Lily Poisoning in Cats

Normally, cats who suffered from arum or calla lily poisoning recover within 18 to 24 hours as long as proper and immediate veterinary care was provided. Give your cat some time to fully recover as he or she regains strength at home.

Prevention of Arum Lily or Calla Lily in Cats

It is recommended for cat owners to avoid growing lilies in their yards. Discarding or giving away gifted arum or calla lilies is also a must to avoid your cat from getting exposed to them indoors.

Most importantly, familiarize yourself with lilies and other toxic plants. Check if arum or calla lilies grow in your neighborhood and take necessary precautions. You can also try to find non-toxic plants that you can grow in your cat-friendly home.